Bandarban is a place of immense natural beauty and sceneries. Bandarban is a hill district, and it is the least populated district in Bangladesh.

Trekking through forests on various hills and small mountains, an opportunity to meet more than 10 different tribes and also a chance to live with them for a night, eat their food and be a part of a uniquely natural lifestyle, and reaching to the tallest peaks of Bangladesh are some of the things which make a tour to Bandarban really special and out of the ordinary tour. Bandarban is covered by Rangamati, Chittagong, Cox’s Bazar and Khgrachori. 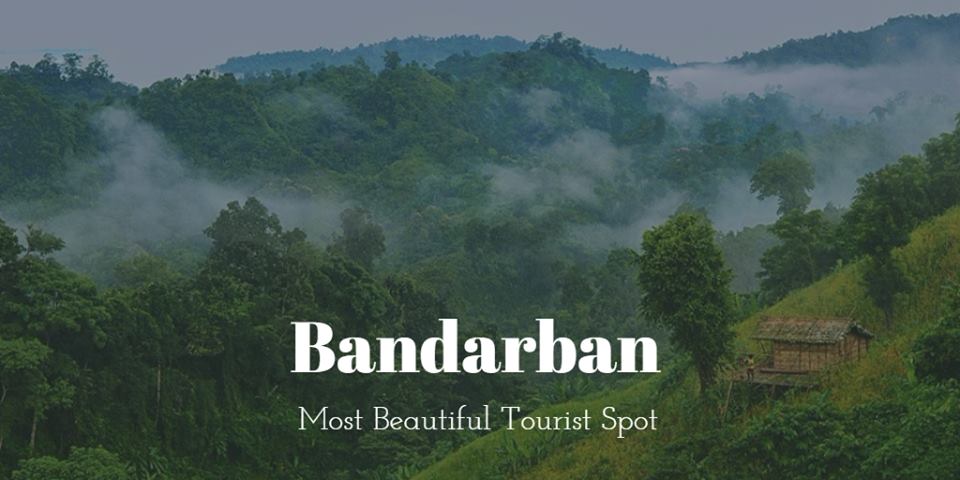 There are lots of tourist spot available in Bandarban. In the tourist’s spots of Bandarban which includes Boga Lake, Buddha Dhatu Jadi, Chimbuk Hill and Tribal Villages, Keokradong, Nilachal Tourist Spot, Nilgiri and Tanchi, Tajingdong etc. A wide range of places is there in Bandarban filled with nature’s best elements.

For example in Nilgiri or Keokragond tourists can touch clouds, or see clouds moving slowly and sometimes embracing the mountains. Tajongdong is known as the highest mountain in Bangladesh, and a vision of Tajongdong is a living portrait of the vastness of nature.

The mountain is immense, and tajing means great and dong means hill, tajingdong means great hill. Also, there is the Buddhist Golden Temple, the Buddha Dhatu Jadi. This temple is a part of the Theravada sect of the Buddhists, and this temple has the second largest statue of Buddha in Bangladesh. Buddhism loves, respects and adores nature, and in any place where there are Buddhist temples and monasteries it is very likely there will be situated breathtaking and magnificent natural places and Bandarban is a living example of that.

Another tourist spot of Bandarban is the Chimbuk Hill which is referred to by many as the Darjeeling of the East. It is a wonderful place for mountain lovers, and also for every tourist this site holds an amazing view of mountains and trees. One can climb the mountain top at various points, eat and talk with the local tribal people and relax looking up at the clouds, which will be very near and the sky.

At night in any hill top points tourists will witness the play of stars, so many bright stars are visible scattered all over that it appears to be like a carnival is going on up above the dark sky. The vast horizon of hill paths looks like waves, and the experience of Bandarban for a tourist will be an authentic one because the natural exquisiteness and grace it contains is really a thing to experience.

Accommodations & Food To Spend The Night

Hotel in Bandarban is sufficient in town but not many in the countryside. Bandarban hotel price is depending on the time and place. The price is expensive in seasonal time and in the Bandarban town. But others time it’s affordable.  In various parts of Bandarban, tourists will have various types of accommodations, particularly in a case of food. For example, there are rest houses in Chimbuk Hill which tourists can avail themselves at a particular cost.

There are numbers of the rest houses available on the internet and through the National Tourism Board, the cost of spending the night in different areas of Bandarban can be known beforehand. Also, there are canteens in these rest houses, but in a case of food, tourists can eat with the local tribes which will be once in a lifetime experience.

Besides, adventurous tourists can live with the tribal people if they can convince the local people who are really hospitable and friendly. Bandarban is a place where tourists can be the closest to nature and experience personally the grace and beauty of the mountain top views.

Costs of traveling to Bandarban

From Dhaka, there are various packages available at various costs which the tourists can take while their visit to Bandarban. A touring company by the name of Bandarban Tours offers various packages, for example, a family touring package named “Close to Nature”, a 3-day 2-night package, will cost 6499 taka per person.

There are also bus services available in areas such as Fakirapul, Saydabad, and Kalampur. The bus fare is around 350 taka and less per person for a non-AC bus. Those who want to travel by AC bus will have to pay 580 taka or less per person depending on the bus service. There are hotels and resort in Bandarban town such as Hotel Four Star, Hotel Plaza Bandarban. The price range of Hotel Plaza is 1500 taka to 7000 taka.